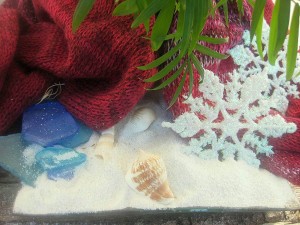 Little L woke up one morning last week and asked if it was winter yet. The excitement in her voice was unmistakable and it took me back to a time when, as a child, I was fascinated by the idea of snow. After all, those children in foreign Christmas shows got to stick out their tongues to catch delicate flakes, could skate on ice, and make big, round snowmen with carrots for noses. The white drifts looked so crisp, clean (and yes, yummy) and I could see myself stomping through, making deep tracks as I crunched along.

Every December, without fail, I would ask my parents if we’d be getting snow, and each year they would patiently explain that we lived too close to the Equator and that our country’s hills were not tall enough for snow to be a reality. Not satisfied, I would mention the hail that had supposedly fallen in the southern part of the island at some unverified point in time. Surely, snow couldn’t be too much of a stretch! My obsession persisted until, one year, my mother encouraged me to consider my wish carefully. Had I thought about the homeless and how the low temperatures would worsen their circumstances? Did I realize that houses on our island were not built to keep out the cold, but to let in the breeze? Needless to say, the ensuing visions of shivering, barefooted vagrants, and of biting wind blowing though our home were sufficient to make me relinquish my obsession of seeing snow in Trinidad.

It was not until I went away to college, however, and lived through my first seven months of cold that I was able to fully appreciate the other side of that chilly coin. There was a lot to this thing called winter, and sledding and snowmen were merely the tip of the iceberg. Pun (albeit a bad one)intended. First of all, I was not accustomed to wearing so much clothing. For someone whose year-round informal attire consisted chiefly of tank tops and sandals, it was a genuine annoyance to not only put on so many layers, but to have to peel them off every time I got to a classroom, cafeteria or dorm. Every day. For more than half the year. Secondly, I quickly learned to tread carefully. Literally. It seemed like there was always an icy patch of pavement or a slick step ready to mess with the inattentive. And although the campus was indeed beautiful beneath a fresh layer of snow, those bright white powdery mounds along the curbs eventually morphed into grey-brown slush. Slush that I would at times wish was sand between my toes.

This is not to say that I was miserable during those winter months. Far from it. I learned to adapt like anyone else, would smile at the sight of flakes as they wafted down, and had fun making snow people and throwing snow balls. But the season also made me think even more about life on my island two thousand miles away, where there are only two seasons: rainy and dry. Where the trees keep their leaves all year long and the weather is always good for shorts and sleeveless shirts. Where every day has the potential of being a beach day.

For the most part, winters are relatively mild where I live now. It is November and although there hasn’t even been so much as a flurry yet, Little L is already making plans for snow men and angels. The cold still feels foreign to me, despite all this time away, but I appreciate that it will be part of the natural order of things for my children. Spring, summer, autumn and then winter. A different normal for them. I can’t help but ask myself if, perhaps, Little L and Littler B will have the same sense of wonder for warm beaches, the sea and sand as I had for snow.