A Blue Butterfly for Halloween 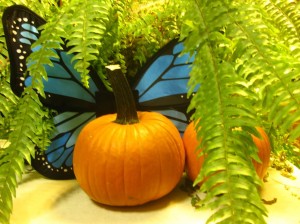 Halloween was not widely celebrated in Trinidad and Tobago when I was growing up. Sure, there were a few neighbourhoods where residents got into the spirit of things with costumes and trick-or-treating, but for the majority it was a day that passed like any other. This, of course, is in stark contrast to its observance here in the U.S. where costumes are sometimes decided upon months in advance; houses, yards and porches are decorated with ghosts, skeletons, witches and headstones; pumpkin carving is an important part of the holiday ritual; and parents accompany younger trick-or-treaters door-to-door, or to trunk-or-treat events (a spin-off in which trick-or-treaters gather in a secure locale and are given goodies from the trunks of parked cars).

My own family’s participation has been limited to buying bags of candy (most of which I eat), putting a ghoulish mask and a few pumpkins on the porch (I think we even carved them last year), turning on the light outside, and waiting for trick-or-treaters to come by. That’s why I was so taken aback when my preschooler announced close to two months ago that she was going to be a blue butterfly for Halloween. Not that I have anything against blue butterflies – they’re lovely – but her proactivity in declaring her intention to play a more participatory role in the celebration took me by surprise. Perhaps, though, it shouldn’t have. Halloween may not have been mentioned in our house since last year, but it has probably been a hot topic of conversation among herself and her friends at school for at least a month and a half. This knowledge has opened my eyes to the fact that culture is indeed absorbed from a very young age, and that my husband and I really need to step up our game if we want our children to understand and appreciate Caribbean culture. The onus is squarely on us.

So, here we are on Halloween. She went to school this morning in her blue butterfly costume, holding a bright orange jack-o’-lantern bucket for all the candy she’ll get at the school’s party. Candy that I will put out of reach (and probably enjoy as well, darn it!). She’ll no doubt tell me about all the fun she had at school and all the candy (she thinks) she’s going to eat. And I’m going to use the opportunity to start a conversation about the blue Emperor butterfly. A beautiful blue butterfly (she loves alliteration) that is found in the tropics and after which the Emperor Valley Zoo in Trinidad is named.

A happy Halloween to those who celebrate it!